Melandru, Tender of the Forests and Fields

And it was that a tribe of godless humans wandered the land. Where camped did they lay waste, senselessly destroying everything nearby.
And so the tribe set out to find another camp, when suddenly sprouted a wall of thorny branches, which blocked their exit.
Then saith Ewan, leader of the tribe, "Know ye our ways. Whosoever does magic in this tribe shall be put to death."
Yet none comes forward. Then, from the earth grows forth a large tree, and unfurling its branches, reveals the upper torso of a woman. Saith She, "I am Melandru, the Mother of earth and nature. Henceforth I bind ye to these lands. When they suffer, so shall ye suffer."
And as She saith, so was it done. From their limbs sprouted branches, and the blood in their veins was the sap of trees. Then was Ewan and his tribe converted, and became they stewards of nature.
-- Scriptures of Melandru: 48 BE 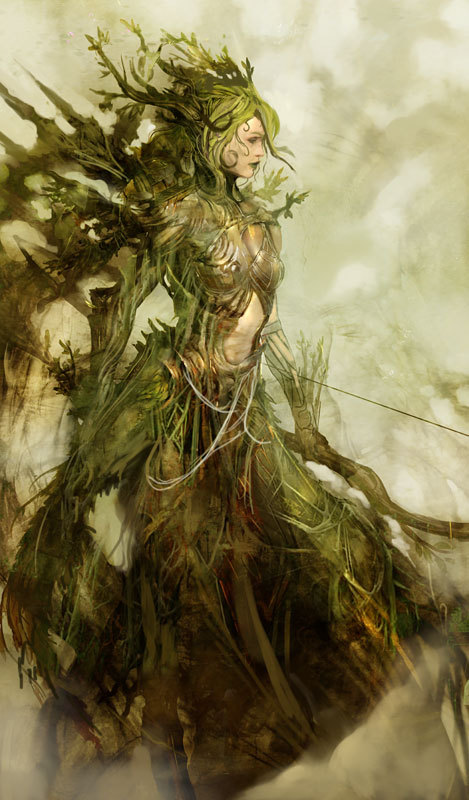 While it is likely that each of the six gods (or at least their predecessors) were active in the shaping of the world since the forgotten were brought to Tyria, Melandru is the only one definitively mentioned by name before the Scriptures. Her work in shaping the world as it is today (apart from the effects of magical disasters such as the destruction of the Crystal Sea, the Jade Wind, the Searing and the Cataclysm) is acknowledged not only by those who follow the gods but also those that see them as their enemies, such as the charr.

As the goddess of nature, Melandru is caretaker of the animals, plants, and of the earth that gives them life. She does not restrict her attention to the wilderness, though: she bestows her favour to cultivated fields as generously as to the forests and mountains, extolling her faithful to maintain the balance between civilisation and the wild in turn. Because of this, Elonian rituals to Melandru are focussed within the season of the autumn harvests as they thank her for her bounty. However, as the fate of Ewan’s tribe shows, her punishment to those who recklessly upset this balance can be harsh; a policy that has been taken up in her absence since the Exodus by devout followers such as Zojun of Cantha and Melonni of Kourna.

Since her responsibilities lead her to focus her attention on the wild places and rural lands of Tyria, it is curious that Melandru is one of the gods named by legend and history as dwelling in the city of Arah before the Exodus. Another curiosity is derived from the wings depicted in many of her statues and murals – a feature that seems out of place with her focus on the features and inhabitants of the land below rather than the skies above, especially as her more common depictions also show her rooted to the ground through the trunk of a tree that merges with her legs. This has lead some theologians to theorise that these might hint at some deeper connection that lies between Dwayna and Melandru than with the rest of the pantheon, one that runs deeper than their shared interest in the well-being of living creatures – an alliance within the pantheon that was demonstrated when Melandru sided with Dwayna against Balthazar and Grenth last Wintersday.

However, Melandru does not seem to restrict her power entirely within the earth, as in Cantha the moon of the new year is viewed as belonging to her. Despite this, Melandru’s following in Cantha has waned, with many Canthans believing that, as the wardens, dragons and kirin were driven mad, Melandru herself simply could not continue to abide within the transformed landscape. Despite this, her devout followers know that her influence remains still, rejuvenating what life can still thrive among the jade and stone. 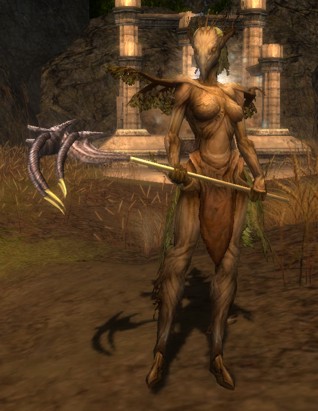 Unsurprisingly, the most visible of Melandru’s followers are the rangers that seek to maintain the balance between civilisation and nature and hasten the recuperation of lands such as Ascalon and southern Cantha that have been afflicted by magical disasters. Otherwise, few adventurers grant their primary devotion to Melandru, although her dominion over the earth attracts the regard of elementalists focussing on the magics of sand and stone. Dervishes are similarly attracted, and while they revere all the gods, they do appear to have a special bond with Melandru. Possibly formed during the early years of the profession walking the wilderness of Elona during the Shattered Dynasty era, today that relationship is reflected the maintenance of many Elonian shrines to Melandru by dervishes. Her avatar bolsters the resilience of dervishes that assume her resemblance (a more alien, tree-like form than in many of the popular representations of Melandru, although branches on her back are reminiscent of the wings seen in many of her depictions), especially against debilitating ailments and the power of the elements.

As well as the forgotten and humans in general, it can be surmised from the fate of Ewan’s tribe that there is at least one group of plantlike beings linked to Melandru. The wardens, with their mix of human and plantlike features, are one possibility (especially if Urgoz was itself formerly devoted to Melandru) – being empathically bound to the petrified Echovald Forest would certainly explain their psychotic behaviour after the Jade Wind. The druids of the Maguuma Jungle are believed to have been worshippers of Melandru, but this has never been confirmed, and while their current form is that of ghostly oakhearts similar to the watchers that receive offerings at Melandru’s shrines, it is not known whether this reflects their corporeal forms before they abandoned physical bodies.

There are indications that other races close to nature may be followers of Melandru in different guises, even if they may not follow or acknowledge the rest of the pantheon. The centaurs of Elona show a strong connection to nature, although Mirza Veldrunner is known to have referred to the pantheon to a human as “your human gods”, suggesting that, at least in the mind of that centaur, there may be no connection between any of the Five Gods of the time and the centaur spirituality based around the Ancestor Tree. Meanwhile, sailor legends speak of a cetacean race that dwells beneath the sea worshipping a goddess of nature they call “Melaggan” – likely the aspect of Melandru as seen by that race.

Formerly believed to be creatures of Dwayna, the true allegiance of the Jingle Bears and Moas was revealed last Wintersday, when Melandru openly sided with Dwayna after Balthazar threw in with Grenth. Both of these literal party animals were among Melandru’s forces in the ritual battles fought between the gods, along with iboga and jacaranda plants decorated for the season, the ghostly Watchers, and, despite their endangerment in their native Ascalon, throngs of the Stalkers that are believed to be sacred to the goddess. 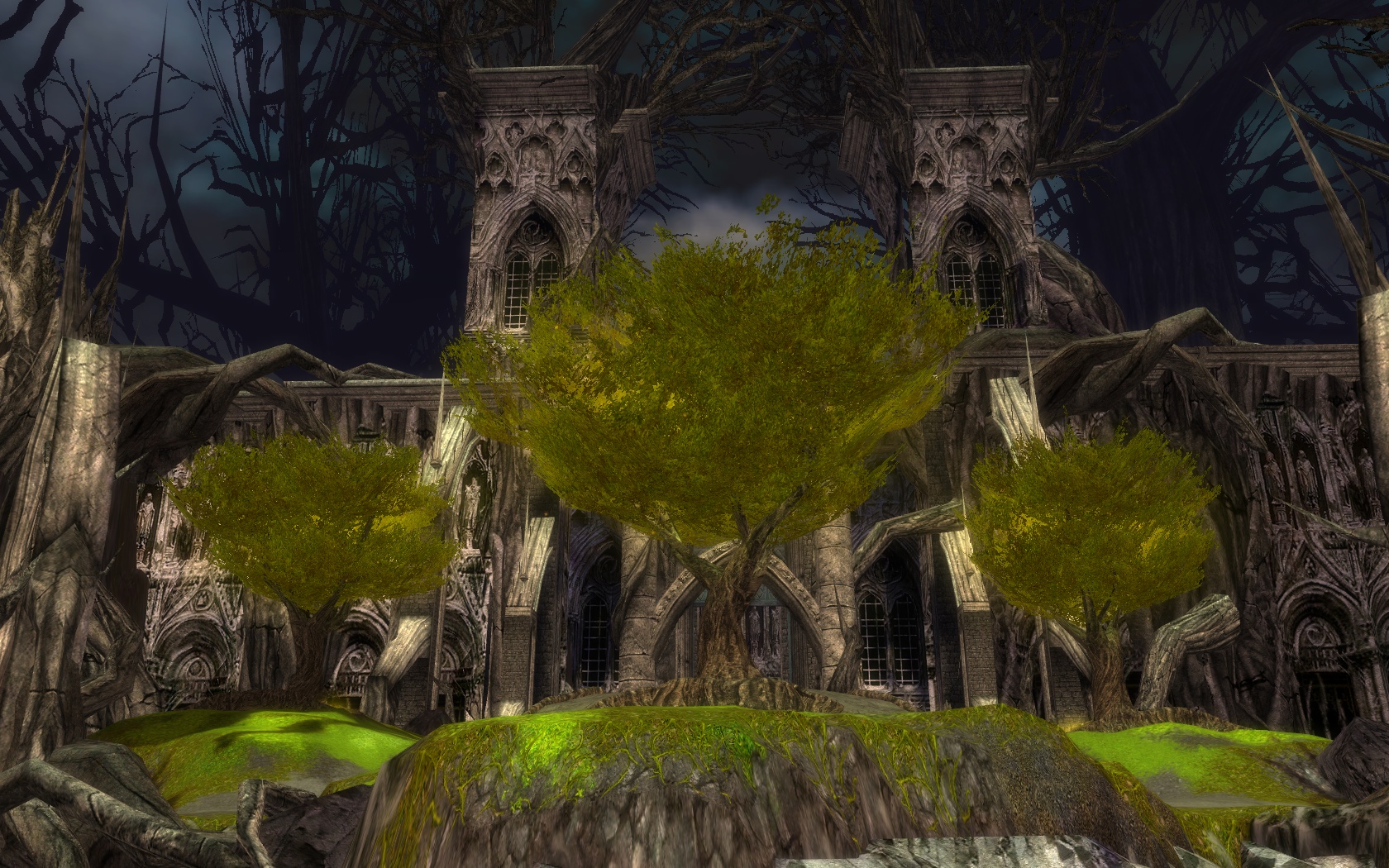 While all of the Kurzicks are concerned with the health of the Echovald Forest, it is the tree singers of House Lutgardis that lead this effort, caring for the Forever Trees and using their magic to restore the waters of the forest and encourage new life to spring forth. Founded in Cypress Hollow after an ancestor of the house viewed a near-miss by a petrified tree as an auspicious portent, the conservatory-cathedral of House Lutgardis sits next to what is perhaps the best sign of their success: the green glades of Melandru’s Hope rolling down to the shore of a shallow lake.

The largest known holy place to Melandru is best known for its more recent history – a sanctuary nestled within the bowels of the earth beneath central Kourna. Abandoned for centuries, the five wells of the site were cleansed of their giant insect infestations by the remnants of the Sunspears after the disaster at Gandara, serving as the centre of resistance against Varesh until her forces moved into the Desolation. Another example of a holy site of Melandru found beneath the earth is that of a golden statue revealed in the earthquakes that heralded the rise of the Great Destroyer - unfortunately, the history of this hidden sanctuary has been lost, although the architecture of the place shows similarities to Ascalonian and pre-Kurzick architecture, including depictions of other gods such as Dwayna, Lyssa, and what appears to be Grenth.

If the druids of the Maguuma were Melandru’s disciples as some believe, this would indicate that many locations sacred to them may be sites dedicated to Melandru. These include a pool in the north of the Sage Lands used by the druids for gatherings, a guarded place of rest near Bloodstone Fen apparently guarded by oakhearts but actually defended by nightmare-like ravagers that respond to any deaths among the tree guardians, and the Henge of Denravi itself. At least one female-only temple to Melandru is known to exist, if Vael’s anecdotes are to be believed – however, he has not revealed the location.

With the exception of the defensive stone walls of Lutgardis Conservatory (which is, nonetheless, open to the fossilised canopy above), holy places to Melandru are kept in harmony with their surroundings, eschewing the elaborate constructions of other deities in favour of simple stone arches and columns. Even her likenesses are raised in harmony with their surroundings, often grown by magic from the wood of living trees (except in Echovald Forest, where they are shaped from stone instead). In fact, outside of the pantheistic sites such as Serenity Temple and Zin Ku Corridor, it is these shrines, that with her favour provide water and shelter on the roads and in isolated places in the wilderness, that best represent the Goddess of Nature to the common worshipper.