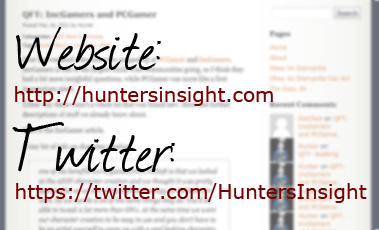 As I continue in my path to interview well known people from throughout the Guild Wars community, I ended up with Hunter from Hunter's Insight this time around. We talk about his favorite things about Guild Wars 2 and how he enjoys voicing his opinion throughout his own blog.

Dutch: Sounds... lazy indeed. Can you give us an introduction of yourself?
Hunter: Hello, I go by the name Hunter and I blog at Huntersinsight.com. It's basically just a site that details my thoughts on Guild Wars 2, and whatever game I happen to be playing at the moment. Instead of just relaying information, I try to voice my opinions and thoughts, inject some insight, and otherwise ramble on about Guild Wars 2.

Dutch: I was wondering, why did you decide to start your own blog, how did you come to it, and what drives you forward?
Hunter: Well I had my own blog years ago. It was a place where I just spewed random ideas about my life and pop culture, what I liked and what I didn't. A creative outlet, I guess. At the same time I was playing Guild Wars, and for some reason became curious as to whether there were Guild Wars blogs out there. After looking I found very few, while there were tons of blogs about WoW, there were only a few Guild Wars blogs. Acidforblood, KillTenRats, and a collective of LiveJournal blogs all seemed to talk about Guild Wars, but not often enough and not about the things I wanted to read and talk about. At the time, I didn't do anything about it, but when Guild Wars 2 was announced I started thinking maybe I would start a blog. After I saw the first Guild Wars 2 trailer, that really kicked the idea into overdrive, the trailer was excellent. The ideas behind the game superb. I couldn't stop now if I wanted to.

Dutch: I've noticed that you've also discussed other games at your blog, is that purely because there isn't that much yet to talk about for Guild Wars and Guild Wars 2, or are you looking to expand?
Hunter: I'm not really looking to expand, no. Part of it is that at times there can be a lack of new or interesting Guild Wars 2 information, but for the most part it's just the drive to write. I think of writing about other games as good experience too... the more I write about other games, the more easily I can describe the things I want to talk about.

Dutch: Yeah, I guess that's true, so what is your current top three out of the things you like about Guild Wars 2?
Hunter: I don't know if 3 is enough, but I'll try. I suppose the first thing is that they are making monsters do things. The whole 'ogres in a field picking daisies instead of attacking the village' thing. It is just so much more interesting and real. Secondly I love the art. I don't think people who play other games realize just what a giant step forward Guild Wars 2 art seems to be from other games. I've complimented the art in Rift for instance, but it just doesn't compare. Guild Wars 2 is way ahead of other games. Thirdly, I'd have to say the way you move. You're rolling around, you've got a ton of ground-based targeting, you can block stuff aimed at other characters, Guild Wars 2 just looks like it plays different. It looks like it plays different than every other MMO.

Dutch: Is there anything out of the original Guild Wars that you'll actually miss in Guild Wars 2?
Hunter: Honestly as much as I like Guild Wars, I've played it off and on for 5 years. There is very little I'll miss. The only thing I can think of off the top of my head is shared storage. That's it.

Dutch: Okay, that's clear to me! From the information that we currently have, what will be the first thing that you'll do when you enter Tyria, 250 years forward?
Hunter: Maybe it seems weird, but I'll probably figure out how to dye my armour. Every other game out there makes you jump through hoops to look the way you want. I'm hoping in Guild Wars 2, right from the first moment I can start dying my armour, that it wasn't some dream from the demo, or in the demo just to show off the dye mechanic.

Dutch: I actually did the same when I had my hands on the demo last GamesCom, so it's totally understandable! I was wondering, what feature in Guild Wars 2 are you looking forward to most, that have not yet been discussed?
Hunter: A lot of things have been touched on, but we don't really have the details on. I guess what I want to know about most is the micro-transaction items. We only know of the transmutation stones, so I'm pretty curious as to how far they're going to take their cash shop. I'm probably more open to micro-transactions than other Guild Wars players, but I hope they keep things reasonable.

Dutch: Now for something different, what would you say to people that want to start blogging about the Guild Wars universe?
Hunter: Well I'd say that you have to blog for yourself. If you blog to become well known, or blog to make friends, you're doing it wrong. Nobody comes to your blog at first, and nobody will comment. It takes dedication and a drive to write things, which isn't as easy as it sounds. Beyond that, you should write honestly, passionately, and do not be afraid to be opinionated.

Dutch: You've blogged quite some time now already, but what has been your favorite experience during your blogging career?
Hunter: I think it's always rewarding to be recognized or complimented. If someone on a forum somewhere links to my blog, I am kind of proud of it. What I enjoy most I think, is the comments. To think I wrote something that someone else felt was worthy of giving me feedback about, well I really enjoy the interaction.

Dutch: So, before we close this one off, anything else which you want to say?
Hunter: There are a lot of people out there who blog, or podcast, or host forums about Guild Wars 2, and I hope people don't just stick with the most popular sites. Back in the days of Guild Wars when I wanted to talk about it I was limited to some large and anonymous forums where it was hard to have my opinions heard out. What I'm saying is, seek out the less populated but still quality sites out there and you will be rewarded.

Dutch: Okay, thank you for your time Hunter!
Hunter: No problem, thanks for asking me Dutch!